Review Of The New Matzo Emoji

There's a new matzo emoji and I'm going to tell you all of my feelings about it, because why not? I've eaten enough matzo in my life to have an opinion about what the designers at emoji think matzo looks like. Image found here
There it is, in all its glory!
Let's get something out of the way: this looks like just about anything except matzo. Flatbread, naan, pizza without delicious toppings, or even a tortilla? Sure. A suspicious communion disk? Maybe. However, it looks nothing like matzo. Why does it have grill marks? Why does it look NOTHING LIKE MATZO? To compare, let's look at a beautiful, wonderful matzo emoji: 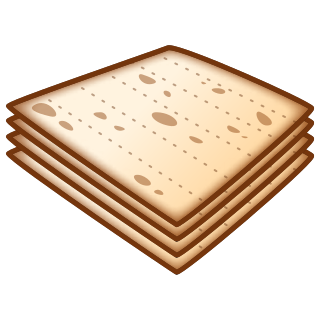 Emoji by Emojidex
There was so much potential. The official designers at emoji could have done so much better. Look at that beautiful square stack of matzos, ready to be eaten or made into pizza. The one released by the official Emoji company is just so sad. It's even called "flatbread" but shows up under typing "matzo". I demand justice for the matzo emoji. Did Emoji forget what matzo looked like? Is there a single Jew in their design department? It doesn't even look like the "matzo" emoji would be kosher for Pesach...it looks suspiciously yeast-y and risen. Now, traditionally, matzo wasn't square and sometimes it's still round (usually when homemade), but the most recognizable form of matzo is square, which makes it look less like a matzo cracker. In conclusion, I rebuke this as matzo.
My final rating: 3/10. Please make it square and less hametz-y. But thanks for trying, Emoji. And MATZO ISN'T FLATBREAD! What do you guys think? Are you as sad as I am about the pseudo "matzo" emoji? And if you want some really cute matzo related merch...check out our Passover 2021 shirt here!